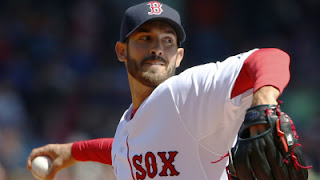 The weather today fits the mood around Fenway as the Sox try to snap a 6 game losing streak, all against teams within their division, dropping them to 10 games under .500. They will host the Braves for two starting tonight which begins a home-and-home series over the next 4 days. The Red Sox will have Rick Porcello (4-6 5.26) on the mound as he attempts to not only halt the teams losing streak but his personal one of 4 straight losses. The Braves send out rookie Williams Perez (2-0 2.70), who pitched a scoreless inning against the Mets on Friday to earn his first career save. In his last start, he went 7 innings and only allowed one run.

The Sox staff gave up 31 runs against the Blue Jays in the previous three games and now are a -60 run differential for the season, which is 3rd worst in the MLB. The Red Sox have won their previous 6 straight games against the Braves and played in a similar home and home series last year.

- A couple of roster moves were made before the game today; Craig Breslow was activated and Travis Shaw was reassigned to Pawtucket, along with Robbie Ross was re-called and Jeff Bianchi was designated for assignment
- Mike Napoli is 1 for his last 20, he's missed the previous 2 games
- Sox starters have the worst ERA in the MLB at 4.94
- David Ortiz has 3 homers in his last 7 games and now has 9 on the season