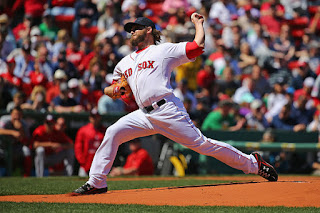 For the 25th time this season the Red Sox failed to score more than two runs in a game, which resulted in their 7th straight loss last night, this time to the Atlanta Braves. During this 7 game skid, the Sox have been outscored 47-28 and have an MLB worst 6.53 ERA making it pretty impossible for the team to jump back into contention in the very mediocre AL East. Today the Sox look to get one win during their 5 game home stand before they head down to Atlanta for the back end of the home and home series.

The Red Sox send Wade Miley (5-6 5.07) to the hill, who will look to improve from his last start/meltdown last week. He will be going up against Julio Teheran (4-2 4.78) who has pitched well in the first 6 innings of his starts but has faltered badly from the 7th inning onward. In a bit of a surprise move on John Farrell's part, he's holding out his hottest hitter, Dustin Pedroia, from the lineup because of a sore left knee after a play that occurred in last nights game. Farrell is also holding out Hanley Ramirez due to a sore back.

- The Red Sox have allowed 311 runs this season, most in the MLB
- Mike Napoli went hitless again last night after sitting the previous two games, his average is now .196
- Pedroia is hitting .407 in his last 13 games
- Braves infielder Jace Peterson extended his career best hitting streak to 9 games last night