Recap - so much for the stirring pre-game team meeting

It was a seething Dustin Pedroia who addressed the media earlier in the afternoon, saying that the team needed to eliminate the distractions currently surrounding them. 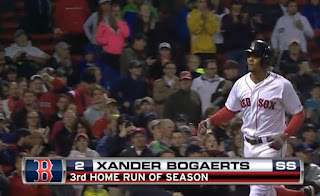 And with that, the Red Sox went out and lost their seventh consecutive game, 4-2 to the Atlanta Braves at Fenway Park.

And to add to the misery, this one was on ESPN for the entire country to see.

Rick Porcello started for Boston. He lasted 6.1 innings allowing four runs on six hits and a walk while striking out five. The loss was his fifth in a row.

Atlanta scored three runs in the top of the fourth inning on RBI singles by Nick Markakis and A.J. Pierzynski wrapped around a Porcello wild pitch that allowed a run to score. Jace Peterson drove in another run in the top of the seventh.

The Red Sox finally got on the board in the bottom of the seventh on Xander Bogaerts' (pictured) third home run of the season to center field.

Mookie Betts had three hits including a ninth-inning RBI single.

Former Red Sox outfielder Jonny Gomes made a slick play in left field in his return to Fenway Park.