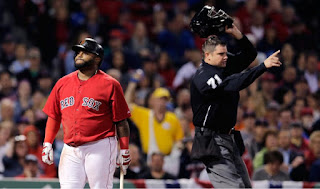 Another game resulted in the Sox offense only scoring 2 runs or less last night, and the team has dropped to 28-39 on the season. Tonight, Clay Buchholz (3-6 4.22) looks to help split the home and home series against the Braves but will be going up against one of the hottest pitchers this season, Shelby Miller. Miller (5-2 2.02) came over in a trade from the Cardinals this offseason and has been incredible so far in his first 13 starts with the Braves. Miller has only given up 2 or more runs in just two starts this season, and at home he has a very impressive 1.59 ERA to go along with a 2-1 record in 5 starts.

The big news today was Pablo Sandoval being benched after liking a photo of a woman on Instagram during last night's game. The third baseman apologized to the team today and accepts the punishment. Travis Shaw has been re-called and will be starting at 3rd in replacement of Panda. Show will be taking the spot of Heath Hembree who will be heading to the DL. Dustin Pedroia is also out of the lineup today with what appears to be a lingering injury that kept him out of the lineup earlier this week.

- Former Red Sox and now current Braves Infielder Pedro Ciriaco is now 5/8, with 3 RBIs in his last two starts against the Sox
- In his only career start against the Braves, Buchholz walked a career worse 8 batters last season