Recap - No Panda, no Pedey, no problem...for at least a night

The Red Sox scored three unearned runs in the sixth inning on their way to a 5-2 win over the Braves at Turner Field in Atlanta. 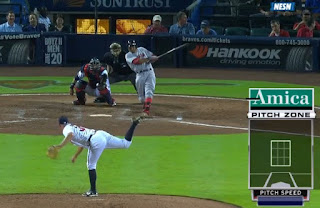 Clay Buchholz gave the Red Sox seven innings, something the team definitely needed, allowing two runs - both unearned - on six hits and a walk while striking out three. With the win, Buchholz's record improved to 4-6.

Koji Uehara pitched a one-two-three ninth inning to earn his fourteenth save of the year.

Boston got a run in the top of the fourth on an RBI ground out by David Ortiz off Atlanta starter Shelby Miller who lost for just the third time this season.

They added three more runs in the sixth. One scored on a bases-loaded double play by Hanley Ramirez that scored Brock Holt. Xander Bogaerts singled another run home and Alejandro De Aza doubled home another.

Mookie Betts (pictured) closed out the scoring with an RBI double driving in Holt in the seventh.

Holt, Betts and De Aza each had two hits for Boston. Holt has been white-hot lately. He has started the last 15 games with twenty one hits in fifty five at bats (.382). He has seven extra-base hits, has scored ten runs and drawn eleven walks.

The Red Sox were without Dustin Pedroia and Pablo Sandoval in the lineup. Pedroia was out with a sore knee; Sandoval was benched after admitting to using his cellphone to post on Instagram during the game.