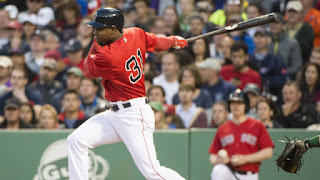 The Red Sox are looking to win their 3rd game in a row tonight, for just the third time this season and they might have caught the Jays offense cooling down a bit. The Jays have the most potent offense in baseball but have only scored 4 runs in their last three games and they looked mystified by Clay Buchholz as he mowed down the lineup over 8 innings. The Sox will look to Eduardo Rodriguez (3-2 4.33) tonight to help chip away at their deficit in the AL East and will be going up against Marco Estrada (5-3 3.45).

Estrada has taken a no-hitter to the 8th inning in his last two starts and has only allowed a run and 3 hits over his last 15 2/3 innings. He hasn't pitched particularly well against the Sox in his career, but does have some pretty good numbers against David Ortiz, Xander Bogaerts and Brock Holt, who are a combined 2/20 against him. Eddie Rodriguez is coming off back to back shaky starts, giving up 9 runs to this Jays lineup two starts ago and 6 runs against the O's last week. But in his three starts on the road this year, Rodriguez is 2-0 with a 0.45 ERA.

- Alejandro De Aza is hitting .474 in his last 5 games with 3 homers, a double and a triple, all while replacing Hanley Ramirez who's been out with a bruised hand
- Jose Bautista is currently 0/20 over his past 6 games