Is Xander Bogaerts an All-Star? The numbers say so... 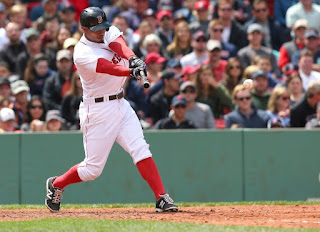 This season, Bogaerts is hitting a solid .298 with 2 homers and 18 runs batted in. While the power numbers aren't there, Bogaerts is at least getting on base, something most Red Sox hitters can't say right now. He is putting up very professional at bats, day in and day out, and looks as comfortable at the plate as he did during the 2013 World Series run (remember the glory days?).

Speaking of comfort, Bogaerts is proving to us all that he can play shortstop at a major league level. He looks outstanding in the field. His defense has improved dramatically over the past year. Bogaerts is doing the little things right at short and it is making all the difference in the world. He is charging slow choppers instead of waiting for the ball to come to him, he is showing good instincts, and he is rounding balls instead of going to the backhand. All of these little things have helped him to become an above average defender.

Xander Bogaerts also has 4 steals which, believe it or not, is a career high for him. His previous high was last season when he swiped just 2 bases. Bogaerts is a very athletic player so it is good to see him use one of his tools.

Bogaerts is finally playing like many of us thought he would last year. Keep in mind that Xander is still just 22 years young so the sky is the limit for this kid.

Here is how he ranks among AL shortstops (entering Friday night):


Obviously, a lot can change between now and the All-Star break, but Xander Bogaerts should be in Cincinnati come mid July.

Thoughts on Bogaerts as a potential All-Star?
Comment below or reach out to me on twitter @Ian_Vescera
Click here to read more posts by Ian Vescera.
Photo from espn.com
Stats from baseballreference.com