Recap - Miley's the ace in Sox win over Oakland 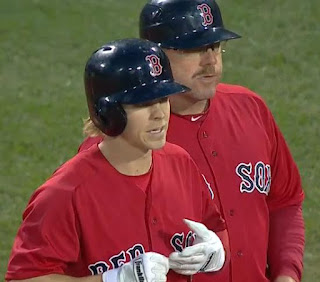 Dustin Pedroia had three hits and the Red Sox took advantage of some sloppy Oakland fielding in a 4-2 win over the Athletics at Fenway Park on Friday night.

Wade Miley got the win to even his record at 5-5. He went 7.1 innings allowing two runs on six hits and a walk while striking out six

Boston took an earlu 1-0 lead in the bottom of the first. Brock Holt (pictured) doubled with Pedroia on base; an error by Ben Zobrist allowed Pedey to score. Holt also had an RBI single in the fifth.

Errors also factored in the single runs Boston scored in the third and fourth innings to take a 3-0 lead.

Oakland chipped away with runs in the fifth and seventh innings including Brett Lawrie's solo home run.

One of the oddities of the game was Oakland reliever Pat Venditte recording outs as a left-handed and a right-handed pitcher in the same inning for the first time since former Red Sox pitcher Greg Harris did it pitching for the Montreal Expos in 1995.

David Ortiz and Pablo Sandoval were both given the night off against Oakland starter Scott Kazmir.