Now can we call up Jackie Bradley Jr.? 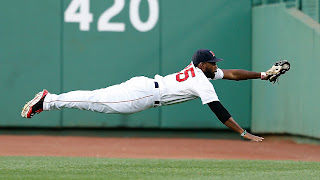 Mistakes. They are inevitable. We all make them. Sometimes people notice your mistakes. Sometimes they don't. When you write for a blog and publish your mistake, people see it. Last month, I did just that. I suggested that the Red Sox should call up Rusney Castillo. Whoops.

Like all mistakes, it was a great idea at the time. The Red Sox were struggling offensively and the team was not getting any production from right field. On the other hand, Rusney Castillo had been playing very well for the Paw Sox. It was a no-brainer. Flash forward a month. Castillo is hitting .244 with an OBP of .266 in 62 at bats for Boston.

Those numbers aren't great by any stretch of the imagination. However, they aren't downright terrible, especially not for this team. There is one issue though. Rusney Castillo's baseball instincts just aren't there on a consistent basis.

Castillo has been a free swinger and has not looked comfortable out in right field. I am not giving up on Rusney as a player, but he just isn't ready to be in the majors at the moment. He needs more seasoning. If he was a piece of steak, I would throw him back on the grill for a few more minutes. He will be ready, but he just isn't ready yet. The time is not now.

As Bill Foley stated, there is one outfielder who is ready for majors. Back to the steak metaphor, this player is done. He has been done for a while now. It's Jackie Bradley Jr.

We all know the numbers. Bradley has been tearing it up in Triple A Pawtucket this year. He is hitting .335 on the season and is the leading vote-getter for the International League in the Triple A All-Star Game. He has proven to everyone that he is a phenomenal minor league player. There isn't anything else he can do to prove he belongs in the majors. And yet, the Sox will not give him a shot. A real shot.

Sure, Bradley was called up this year and technically had a "shot". He had 11 at bats in which he did not record a hit. However, those 11 at bats came against Sonny Gray, Felix Hernandez, and R.A. Dickey. That isn't a recipe for success. After all, isn't the job of the manager to put his players in the best position to succeed? Come on Farrell, Bradley deserves a real shot.

However, the Red Sox brass has shown no inclination to do so. Case in point, Mookie Betts went down with an injury yesterday and was out of the lineup today. The Red Sox sent down a pitcher and called up a position player. You would think that it is an outfield replacement for Betts right? Wrong. It's Travis Shaw! No disrespect to Shaw, but he came up for a day. He had one at bat today in a blowout loss and has already been sent down. This did not help the Sox out at all.

Personally, I would rather see the best defensive outfielder in the game patrol either right or center for the Boston Red Sox, not the Pawtucket Red Sox. As I said tonight on episode 3 of RSLIVE, I would rather see great defense if we aren't going to get any hitting. Worst comes to worst, you find out once and for all if he should be on this team going forward. Additionally, for this season, the defense will be there. You can book it.

The Sox clearly have moved on from Bradley and it's a shame. He deserves at least one more chance to prove he can be a key piece (of steak) going forward.

Should the Red Sox call up Bradley?
Comment below or reach out to me on twitter @Ian_Vescera
Click here to read more posts by Ian Vescera.
Stats from baseballreference.com
Photo from cbssports.com