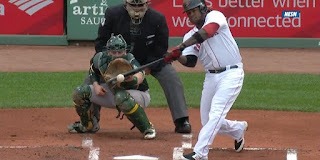 Ramirez (pictured) put Boston out in front 2-0 with his thirteenth home run of the year in the bottom of the first inning off Oakland starting pitcher Jesse Chavez.

The A's got a run back in the top of the third on an RBI triple by Billy Burns.

The Red Sox put another pair on the board in the bottom of the inning on David Ortiz's twelfth double of the year that scored Ramirez and Mike Napoli's RBI single which scored Ortiz.

Kelly, who was most likely pitching for his spot in the rotation, went six innings to pick up the win, his second of the year. He gave up just one run on four hits and two walks while striking out six.

Mark Canha hit a solo home run off reliever Alexi Ogando to bring Oakland to within two in the top of the seventh.

Tommy Layne and Matt Barnes combined for a scoreless eighth inning; Koji Uehara earned his thirteenth save of the year with a one-two-three ninth inning.

Dustin Pedroia had a hit and two walks as he continued his strong performance since being installed as the leadoff hitter. Mike Napoli had two hits.