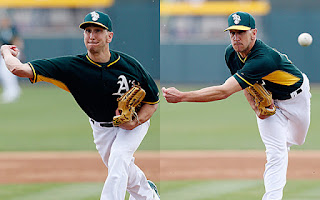 Last night, Pat Venditte did something no pitcher had done since 1995. He pitched with both hands in the same game. Venditte, the 29 year old rookie, tossed two scoreless innings of relief while giving up one hit and striking out one in his MLB debut. He was also able to record outs with both arms in the same inning. You can watch his debut in the video below.

Since he pitches with both arms, Venditte uses a custom 6 finger glove that can be used on either hand as seen in the Gary Striewski tweet below.

It is pretty amazing to think that Venditte is good enough to get people out at the Major League level with both arms. He truly is a great story and it will be fascinating to see if he can continue to produce in the bigs. Let's just hope it is not against the Red Sox next time...


Thoughts on the switch pitcher?
Comment below or reach out to me on twitter @Ian_Vescera
Click here to read more posts by Ian Vescera.
Photo from cbssports.com
Stats from baseballreference.com