The Red Sox slammed sixteen hits including three home runs, and got six strong innings from Wade Miley in a 13-2 in over the Royals in Kansas City. 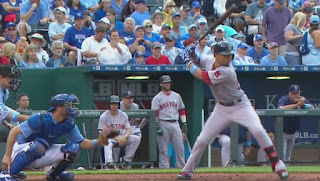 Miley went six innings for his seventh win of the year. He shut the Royals out on just five hits. He walked three and struck out a pair. He stranded seven Royals on base.

Boston did most of its damage in the fifth and sixth innings when they scored a combined eight runs.

The Red Sox had twelve hits including home runs by Hanley Ramirez, David Ortiz and Mookie Betts (pictured). For Ortiz, it was his tenth of the season and the 476th of his career, moving him ahead of Willie Stargell and Stan Musial into twenty-ninth on the all-time MLB home run list.

Over his last nine games, Betts is 20 for 35 (.571), with four doubles, a pair of triples, three home runs, nine runs scored and eight RBIs