Time to call up Brian Johnson 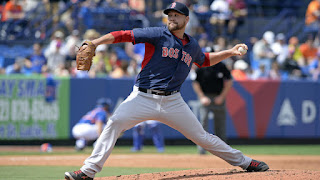 Brian Johnson is lighting it up down in Triple A this season. Johnson is 8-4 for Pawtucket with an ERA of 2.57 and has 76 strikeouts in just 80.2 innings. On the other hand, Justin Masterson has been downright awful this year. He is 2-2 with an ERA of 6.37. Opponents are also hitting .286 of of Masterson. This will be Masterson's first start for Boston since May 12th when he lasted just 2.1 innings in a loss.

As this season continues to slip away, why should Masterson rejoin the rotation? Masterson is only on a one year deal and will probably not be in this rotation next year. Additionally, he has not contributed when he has been in the rotation. However, Johnson could be a big piece of this team going forward and has shown some promise in the minors.

If this season is a lost one, then I want to figure out if these prospects, like Brian Johnson, are going to be key contributors going forward. Personally, I think Johnson will contribute to this team and will do so for years to come. He does not light up the radar gun, but he has pristine control (23 walks in 80.2 innings) and he has great off speed pitches. At some point, you have to see what you have in them. Why not start now? What is the worst thing that can happen anyways? Worst case scenario, you continue to lose games and that isn't anything new for this team. If that's the case, at least make it exciting with some young guys.


Thoughts on Brian Johnson?
Comment below or reach out to me on twitter @Ian_Vescera
Click here to read more posts by Ian Vescera.
Stats from milb.com and baseballreference.com
Photo from bostonherald.com