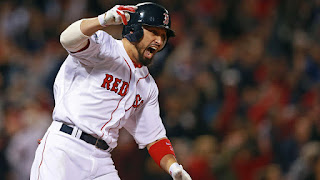 The Flyin' Hawaiian better start packing his bags. Just moments ago, the Red Sox announced that Shane Victorino and cash considerations had been dealt to the Los Angeles Angels for infielder Josh Rutledge. Rusney Castillo has been called up and will start in right field for Boston tonight.

Victorino is hitting .245 with 1 homer and 4 RBIs in just 94 at bats this season. This move makes sense for Los Angeles as they bolster their outfield for a potential playoff run. For the Red Sox, Josh Rutledge is just a depth move. Rutledge has yet to play in the majors this season, but has spent parts of the last 3 seasons in the majors with Colorado. With Pedroia hurt, Rutledge may get the call up sometime soon, but he is nothing more than a backup infielder.

We all knew a trade of Victorino was coming. It just made sense. This team isn't going anywhere and he wouldn't have been resigned with the logjam of outfielders the Sox already had. Now, Castillo and maybe even Jackie Bradley Jr. will get a shot at the major league level. That being said, Victorino was a fan favorite and a huge part of the 2013 World Series team. We couldn't have won it without him. Thanks for all you have done Shane, but it is time to move on. Good luck in Los Angeles.