Franchise Four: Did the fans get it right? 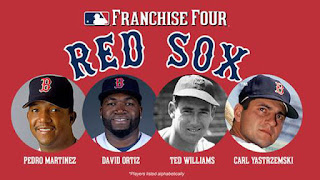 While the current Red Sox are playing poorly, let's take a look back at some players who have made massive contributions to this team in the past. Over the All-Star break, MLB announced the "franchise four" for each team. The "franchise four" are the four players who best represent the history of that organization. Eight players were nominated for each team and then the list was cut in half via fan voting.

Dwight Evans, Carlton Fisk, Pedro Martinez, David Ortiz, Jim Rice, Ted Williams, Carl Yastrzemski, and Cy Young were all nominated for a spot among the Sox elite. In the end, Martinez, Oritz, Williams, and Yastrzemski were chosen as the "franchise four".

Personally, I think the fans nailed this voting. As much as I would love to include Fisk, I just can't make a better case for him as opposed to one of the other four. These four players truly represent the Sox and all the history this great organization has. To me, there would be something wrong with this list if the greatest hitter who ever lived, the best clutch hitter ever, the greatest pitcher in team history (and arguably the best pitcher in MLB history), and the man who led the Impossible Dream season were not on this list. All four players have their unique place in Red Sox history and that place definitely includes a spot on this list.

What say you Red Sox fans? What would your franchise four be? Did a player get snubbed from the nominees? Comment below or reach out to me on twitter @Ian_Vescera