#FREEJBJ and Allen Craig too? 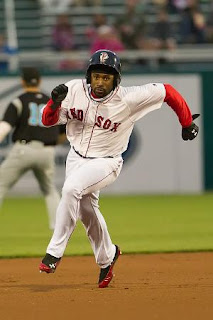 Unless you have been living under a rock for the past 6 months, you are probably aware that the New England Patriots starting quarterback, Tom Brady, has been suspended 4 games for his role in the "deflating" of footballs in the AFC Championship Game.

In response, Patriots fans have started a movement to "Free Brady". This movement has been all over the internet as Patriots' fans voice their displeasure over this stupid suspension. Even our fellow site, nepatriotslife.com, is selling t-shirts and has been great in covering this "scandal". (Click here to purchase a FREE BRADY shirt).

In any event, the reason I bring this up is to point out the relenting nature of Patriots' fans. They know that Brady shouldn't be suspended and he should be free.

Especially with the trade deadline looming, Bradley should be up. The Sox could use the next few weeks to showcase him at the major league level since it's clear he is not in the long term plans here. If you don't plan on using him long term, get something of use for him (pitching anyone?). No point in having him stay in Triple A forever.

That being said, he should get another chance. I still believe in Bradley's ability. He is still the best defensive outfielder out there. This team has nothing else to lose. Why not give him a chance?

If he's not traded, why not use him as a bench guy in the short term? He has value there. At the very least, Jackie Bradley Jr. could be a good fourth outfielder and an amazing defensive replacement for Hanley. Personally, I would rather see a younger player, like Bradley, get playing time as opposed to a run down Victorino who won't be here next year.

Speaking of guys who won't be here next year, Mike Napoli (the guy I recently broke up with) can't keep getting playing time. The Red Sox only All-Star, Brock Holt, has just 5 at bats in the 4 games since the break. The beauty of Holt is that he can play anywhere. I get that. However, how valuable can he be if he is on the bench and doesn't play anywhere?!?! He needs to be in the lineup somewhere. First base has an opening.

If they don't want him tied down to one position, how about we call up old friend Allen Craig? This guy, for better or for worse, will be around for the next few years. He can't be worse than Napoli at first. Why not give him a shot? His situation is similar to Bradley. They need to figure out what they have with him once and for all. Starting him at first from now until the end of the year gives the team plenty of time to make a call on him. Worst thing that can happen? He plays like Napoli is right now.


Should these players get another shot in the majors?
Comment below or reach out to me on twitter @Ian_Vescera
Click here to read more posts by Ian Vescera.
Photo and stats via milb.com