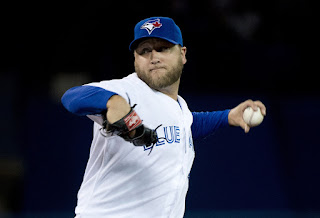 This afternoon, the Red Sox will attempt to win their 4th game in a row for the first time this season. After another tight win against the Jays last night, the Sox are quietly making progress at gaining ground on the other 4 teams within in AL East, now sitting only 6 games back of 1st place as they get closer to the half-way point of the season.

Rick Porcello (4-8 5.54) will be on the mound for the Red Sox as he looks to get his first win in over a month and keep the Sox momentum going. The Blue Jays will have Mark Buehrle (8-4 3.81) who has steadily led the Jays to a 41-38 record and has regularly pitched well against the Sox over his career, including going 4-1 over his last 5 starts against them. David Ortiz has 4 homers against Buehrle in his career which is 2nd most against him and will slid into the 3 hole today as Manager John Farrell changes around the lineup now that Hanley Ramirez is back.

Porcello hasn't won since his start against the Mariners on May 16th and since then is 0-6 with a 7.07 ERA and hasn't been very successful at keeping a lead. He has good numbers against Josh Donaldson and Russell Martin this year, who have combined to hit 1/22 this season.

- Jose Bautista went hitless last night, which now brings his slump to 0 for his last 23
- Hanley Ramirez is back in the lineup today; he currently leads the team in homers and RBIs
- Xander Bogaerts is the only Red Sox player currently in the top 5 per position in All Star game voting
- Deven Marrero will be making his first career MLB start today at second base