Recap - nothing to see here as Sox lose again

The White Sox are making it look WAY too easy. 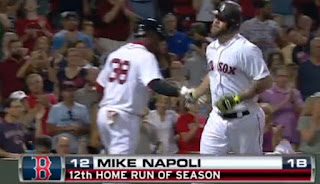 For the third game in a row, Chicago took an early lead off a Red Sox starting pitcher and coasted to a win. In tonight's case it was Rick Porcello who allowed six runs in 2-plus innings as Boston fell 9-2 at Fenway Park.

Coming off a very strong performance against his former team, the Detroit Tigers, Porcello fooled absolutely no one in the Chicago lineup, allowing ten hits and a walk while striking out two.

Sit down for this next one.

Napoli doubled in the fourth to drive in Xander Bogaerts; he hit a solo home run (12) in the seventh.

Mookie Betts was out of the lineup, having been put on the 7-day disabled list with concussive symptoms after Tuesday night's game.

Pablo Sandoval left the game in the sixth inning due to dehydration.