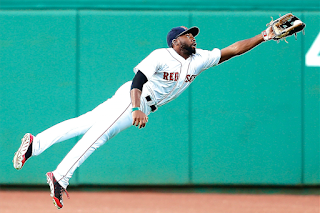 When a ticket is offered to go see Pedro's retired number ceremony at the last minute, you take it. That's what I did last night and I got to enjoy it from the Right Field Roof Deck with an amazing view of the ceremony and whatever occurred after that. The Sox lost another poorly played game last night to the White Sox 9-4 and tonight will attempt to get back into the winners column for just the third time since the All Star break. Rick Porcello (5-10 5.51) takes the mound for the Red Sox and he appears to have started to get back to his previous success because over his last 3 starts his ERA is 2.50. He will be up against Jose Quintana (5-9 3.56) who threw his first career shutout last week and will attempt to keep the White Sox winning streak going to 7 wins in a row.

One thing to be looking out for tonight is the White Sox offense in the first inning. They've scored 9 runs in the first two games of this 4 game series in the first inning and have gained a ton of momentum for themselves early on, forcing the Red Sox to play from behind which as we've seen all season long, they're not successful at all.

- To go along with watching what happens in the first inning, Rick Porcello has allowed opponents to only hit .203 in the 1st all season
- The White Sox haven't won 7 in a row in over 3 years
- Gordon Beckham is 5 for his last 53, a .094 batting average, but is almost a .500 hitter against Porcello
- Jackie Bradley Jr has been re-called due to Mookie Betts being placed on the 7 day concussion list