Red Sox are Detritus; Let's look to the Minors. One Man and his Son's Trip Through New England in Search of a Minor League Bobble head 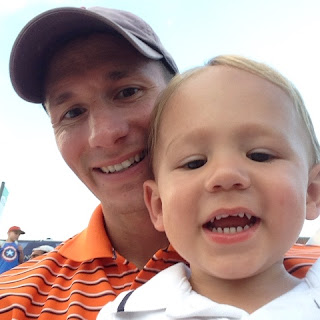 Just to let you know, I am a die-hard Red Sox fan. I plan my summers around important games, I attend Christmas at Fenway, I braved the storm this winter to go to Winterfest at Foxwoods and  I wear my hat proudly. I am a Red Sox Nation card holder, I drive two hours and pay for parking, show up 2.5 hours early to the games, and watch batting practice from the Green Monster. I do all of this in the name of John Henry. But this season, I knew something just didn't look right. Without starting pitching, the Red Sox just looked like a team that would mash the ball but not be able to win the close ones. Turns out, I was half right. They can't hit or pitch, and after this 5 game losing streak, they are dead in the water, floating around waiting for a shark to pick up their rotting flesh and take them under.

Well, just because the Red Sox are almost finished doesn't mean I am going to let the bad taste in the mouth affect my love for America's Past-time. That being said, my 23 month old son and I took a long weekend to go to three different minor league baseball parks and see how the other half lives. Here is what we found out: 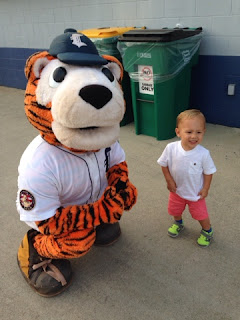 Saturday Night and the Connecticut Tigers, the Detroit Short Season Single A team, have a game in Norwich. The Chris Dodd Park is alive that night, as they are giving away Mike Rabelo's (their manager and former MLB catcher) bobble head. My son and I arrive one hour early to assure that we will get our free souvenir. We are not denied as we walk through the doors, but my son wanted to stay outside and observe the giant Alligator statue. He loves mascots. More on this later. We enter the park, sit in our third row seats and..... all my son wants to do is watch the players stretch. I am good with walking to the front row, and after about 2 minutes of soaking in the view, the Tigers announce that C.T., their mascot tiger, will be walking the boy scouts around the outskirts of the warning track. Immediately, my son is fixated and wants to jump on the field and walk to say hi to C.T. After about what seemed like an eternity, C.T. finally made his way to our area and sat down on the fence to greet my son. They exchanged high fives and hellos, and then C.T. was on his way towards home plate. My son was not satisfied and began to cry because he wanted C.T back. Once I finally got him to calm down, we walked to our seats to watch the game.

Both teams played like youngsters. There were some bad errors, some decent hits, and a lot of excitement. It is weird though, because the ball just doesn't jump off the bat like it does with major leaguers. Still, for about $9, you can't go wrong. It terms of food, my son asked for a hot dog, which he devoured, and then we went off to the left field grassy area where kids were playing tag and had no desire to really watch the game. While I stood facing the game and was also able to see my son, he had no problems running around with the older boys until his pants and shirt were stained with grass and mud. We left after the 5th inning and took a 45 minutes drive home. He fell asleep in the car after the 15th minute. 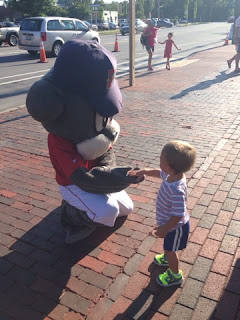 We took Sunday off from baseball but woke up Monday morning refreshed and headed on our 3 hour trip to Portland Maine to see the Sea Dogs. Portland is Boston's AA affiliate and while they have had some strong teams in the past, this one is lacking star power but never lacks fans. Maine does a great job supporting their teams, and today was no different. We arrived to the park 1 hour and 15 minutes before the first pitch in search of the Henry Owens bobblehead. As we walked towards the front gate, Slugger the Sea Dog greeted my son. My son did the usual things that almost every 2 year old does when approached by a mascot; He stared as Slugger, waved, took a step towards him and then jumped back when Slugger took a step in my son's direction. After a while, he soon loosened up, walked toward the giant dog and they embraced for a second. Unfortunately, I think that whole exchange cost us his bobble head because as soon as we got to the gate, the ticker-taker announced, "Sorry guys, all out!" We arrived over an hour early for a minor league team and they were ALREADY out of bobble heads! Yikes! My son was disappointed when I told him he wouldn't get one, but was immediately happy when a random worker showed up out of no where to hand my son a ball. It's like he knew there was a child in the area who was sad, and he brightened his day instantly. Crisis averted.

We walked to out seats, which were last row of the 100 level seats and on the aisle. This way, in case my son wanted to impulsively leave his seat (which happens every minute), we could get up and not bother anyone. Again, when the game started, he was more happy to see the mascot and could care less about the game itself. But I enjoyed what I saw. Portland scored 4 in the first and then scored again in the bottom of the ninth on a controversial call to walk off and win. Did my son enjoy himself? Yes. However, there wasn't a whole lot for him to do on the concourse, so we basically just walked around and he just looked for "Slugger." His grandparents, who live in Portland, came with us for the game, and then walked him home by the 4th inning. They reported that he fell asleep in his stroller when they were about halfway home.

The next morning, we awoke in Portland and went down to the old port for lunch. After we ate and he took a nap, we were on our way to Lowell, home of the Single A Short Season Spinners. This Red Sox affiliate is home to mostly young kids who have just been drafted. The Red Sox's first round pick, Andrew Benintendi, was also in the lineup that night so it was great to see him in person. We arrived a bit early, so we walked around the front of the stadium and into the shops. The stadium is right across the street for UMASS-Lowell, so it was well maintained and everyone around seemed very talkative and friendly. There was a DJ out front and the weather was perfect, so my son was smiling the entire time we waited. Well, we also waited next to the giant blowup of Canal-igator, their mascot, so that of course made him grin ear to ear. It was Mookie Betts bobble head night so people were excited, and when we entered through the gates, my son grasped his new prize and wouldn't let it go. This is the 5th bobble head of his collection, and 3 of them are already broken. He doesn't care though.... he just shakes them until their head falls off. 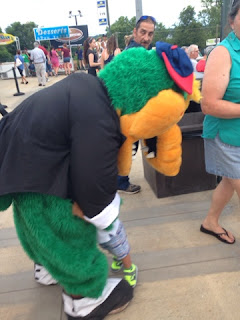 Surprisingly, he really enjoyed himself in Lowell. I thought we would be cranky and tired, but he got to play in the kids area by the left field bullpen, the seats were bleacher style so we had a lot of room to run around in, and Lowell did a great job keeping everyone entertained with small games on the field between innings. My favorite? They had two people dressed as Mario and Luigi racing around the warming track in go karts. Awesome! I decided to make the executive call and leave the game at 8pm so we could get home by 9:30pm. My son stayed awake the entire ride home, clutching his bobble head and smiling. 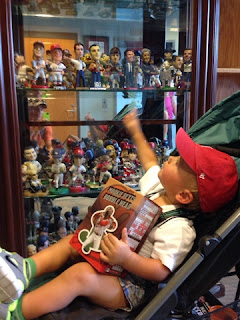 What did I learn this weekend? That bobble heads run the Minor Leagues! And also that I think my son is beginning to love this game as much as I do. And even if the team I love dearly isn't going to win it all this year, there is still plenty of other places in the Northeast to go enjoy as well. I will be back to Fenway two more times this year, but I may visit Norwich, Portland and Lowell again as well. I know my son will be happy to make the trip! 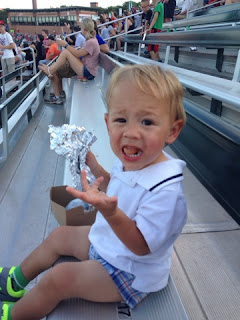