Monday I talked about the Red Sox not quite being mathematically eliminated from the 2015 race for a postseason berth.

They are now in a position where they need to win 48 of the final 68 games remaining. For the numbers people that is a .706 winning percentage that will climb with each loss down the stretch.

The Red Sox are not going to make the postseason in 2015.

For get the games back in the AL East, forget the games down in the wild card race, just take a moment to digest this and then move on.

What's next for the Red Sox?

As Gorden Edes from ESPN puts it, "John W. Henry was willing to blow up the Boston Red Sox roster twice in three years, because he wasn't interested in a beauty contest. He said as much barely seven weeks ago. If it was clear in July that the Red Sox had no chance of contending, he said, he didn't care if they finished last in October."

While John Farrell pulling starting pitchers out of the shake of a magic 8-ball, their best pitcher Clay Buchholz is off to visit Doctor Andrews which is never a good sign. We have been watching rookie Brian Johnson, Eduardo Rodriguez and knuckleballer Steven Wright trying to right the ship that the original starting rotation has all but sunk.

Joe Kelly is being called back this week after a month in Triple-A, not earning the call up as he has shown absolutely no improvement, but out of desperation. Nothing good can come of this.

Justin Masterson started the season in the rotation but has been demoted to the bullpen. After a horror-show relief outing Tuesday, he hit two batsmen, had a wild pitch and gave up a two-run home run, Masterson walked out of the clubhouse with a pensive look on his face suggesting that he is done.

Red Sox general manager Ben Cherington arrived in Houston yesterday, meeting the team upon its arrival from Anaheim. Nine days before the trading deadline, there is no deal Cherington could make that would reverse the wreckage of this season.

Back in 2012 Cherington was able to unload dead weight deals on the Dodgers, this time around he has no one to help with the damage wrought by Hanley Ramirez and Pablo Sandoval. Both have been a mess based on the value they have brought the Red Sox at the cost, which should probably not surprised anyone as the red flags were there for everyone to see.

For now Cherington needs to focus on the other veterans on the roster.

Shane Victorino might be able to fill an outfield need for a contender should they want to bet on him staying healthy down the stretch.

Mike Napoli as a Red Sox product has reached his expiration date, even though he continues to play the game right through his hitting struggles. The Red Sox need to take whatever they can get in a deal and eat the costs remaining if need be to free up the first base position.

It is time to take the disaster Ramirez from left field and use the remainder of the season to put him at first base. This experiment needs to happen now rather than finding out it does not work next March. If he won't play the position then you have plenty of time to deal with his attitude instead of having him rock the boat at the start of a season.

Alejandro De Aza has been a major find for the Red Sox and should attract the attention of a contender before the July 31 trade deadline, so put the word out he is available.

Koji Uehara has a year left on his contract, is 40 years old, but he remains one of the most valuable assets as a closer and might bring enough return to consider passing him on to a postseason contender right now. The Red Sox should at the very least be open to listening to deals for him.

Hold on to Ryan Hanigan, because you want a veteran catcher to shepherd all these young pitchers.

Bring up Allen Craig and play him every day, or eat his money, now.

As stated here previously, Jackie Bradley Jr. should be with the Red Sox now. Give him the chance denied him this season and find out whether he can hit on this level.

Same for Rusney Castillo, determine if he is worth the price or move him.

If a Bradley-Betts-Castillo outfield isn't a viable option in 2016, find out now.

The makings of a strong nucleus going forward has revealed itself: Mookie Betts, Xander Bogaerts, Blake Swihart, Christian Vazquez, Rodriguez and Johnson. Those are guys you can build around.

As this season is a wash, us it to season Henry Owens and see what he can do before you decide on major pitching moves this off season. 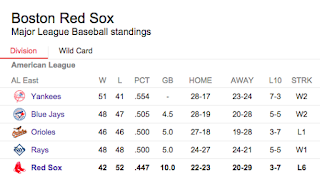 There is no way you listen to the chatter on a Cole Hamels or Johnny Cueto trade? Forget it. Think younger now that contention is an illusion and work towards a 2016 rotation and bullpen that you can trust to get you to the postseason.

Owner John Henry prides himself on being ruled by logic, so time for him to re-examine his commitment to the current management team. Everything should be on the table.

The Red Sox are mathematically eliminated... time to focus on the 2016 season.