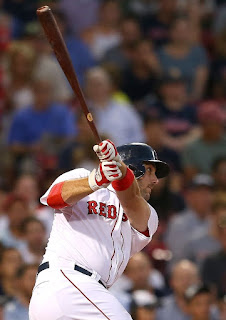 Dave Dombrowski, welcome to the Boston Red Sox. Glad to have you aboard. Now let's get down to business. There is plenty of work to do.

In case you didn't notice, that awesome first baseman with the beard who killed your Tigers in the 2013 ALCS isn't here anymore. Heading into 2016, the first base position is as wide open as can be. Fortunately, there are plenty of options to choose from.

Before we get into the real options, this must be said. Hanley Ramirez, under no circumstances ever, should play first base. He cannot be considered an option at first. I get that he was a former infielder and might be better off fielding ground balls. However, Hanley is not the athletic player he once was. He can barely get to the fly balls that he doesn't catch out in left field. He has shown no commitment towards defense in left field, so first base might not be any different. I do not trust him to put in the effort to learn the position.

If Hanley was at first, he becomes much more important to the defense. Having a good defensive first baseman, like a Mark Teixeira or a Kevin Youkilis (throwback to the Greek God of walks), can do wonders for a defense. Having a bad one, can be catastrophic. Ramirez would be involved on just about every ground ball whether it's hit to him or he is taking a throw. I don't know about you, but I do not trust him to dig out a low throw in the dirt.

So here we go. Real first base options for the 2016 Red Sox.

Bring in a free agent: I do not see the Sox taking this route although it is a possibility. The first base class is a pretty weak one even if they decided to sign someone. Chris Davis is the only big name player out there. Can't see the Sox going after him. I doubt they want to spend more big money on hitters.

Trade: With a weak first baseman class, it would be tough to make a splash at first via signing. However, there is always the possibility of a trade. I am not sure where the Sox go if they make a trade. With all the options they have from within, I don't think they make a deal. Most of their trade efforts should be focused on pitching anyways.

Pablo Sandoval: This would certainly be an interesting way to go. Pablo has played 477.2 career innings at first and has maintained a solid .991 fielding percentage. Unless the Sox have a replacement at third baseman in mind, I don't think we will see Sandoval shift across the diamond. That wold just create another hole at third base. I am probably in the minority here, but I think Sandoval will have a bounce back year next season at third.

Allen Craig: Oh how the mighty have fallen. Hit in Triple A first, then we can talk big leagues. We will cross that bridge when we get there. If we get there...

Sam Travis: This name has not been tossed around much. Sam Travis is a 2014 second round draft pick out of Indiana University. Travis is relatively short for a first baseman as he checks in at 6'0" and weighs 195 lbs. He is ranked as the 10th overall Red Sox prospect by soxprospects.com and the 12th overall Red Sox prospect by mlb.com. Travis has seen time in both Single A Salem and Double A Portland this year. He is hitting .304 with 8 homers, 66 RBIs, 16 steals, and a OBP of .371 between both levels. Travis is just 21 years old and this is his first full season in the minors (he played in 67 games for Greenville and Lowell last year after getting drafted).

Starting Travis at first base is definitely not an option most people are thinking about. The Sox could really go young by starting Travis at first. However, I don't think that he will start next year. Given that this is only his first full minor league season, I believe the Sox would like to get him some more at bats in the minors and want him to gain more experience. Make no mistake though. If he keeps tearing it up, expect to see Travis up in the majors next season, just not to start the year.

Travis Shaw: Now for my favorite option. Travis Shaw (pictured above) should be the starting first baseman for your Boston Red Sox next year. Shaw is dominating in his audition for a roster spot for 2016. He is currently hitting .369 with 6 homers and 11 RBI. Shaw looks very comfortable at the dish and has been a solid defensive first baseman for the club.

Sure, he may not be considered a big name "prospect", but guess what? It doesn't matter. Remember a year ago when this kid named Mookie Betts was rising through the system? Many people questioned whether he was trade bait or the real deal. They only questioned him because he was never a highly touted guy. I am not trying to equate Shaw to Betts in anyway, but players do progress and outlive whatever they were projected to do.

Despite what people think, Travis Shaw isn't coming out of nowhere. Shaw has always displayed power in the minor leagues. His totals have been 8, 19, 16, 21, and 5 this year. Now that he is getting a chance in the majors, give credit where credit is due. Often times we say a "prospect" hasn't had enough of a sample size if he struggles. Yet if an unheralded minor league like Shaw comes up and performs well, it is generally seen as an admiration.

Do I think Shaw can keep up this type of production? Of course not. It has only been 23 games. Do I think he can hit between .240-.270 and hit 20 homers with 70 RBI? Absolutely. Give him a shot. Until he proves otherwise, why not?

Keep in mind Kevin Youkilis didn't become an everyday player for the Red Sox until he was 27 years old! Shaw is only 25 and that is still a very young player. Again, not comparing Shaw to Youk, but it just goes to show that you don't have to be breaking into the majors at 21 years old to end up as a good ballplayer.

Certainly, Dombrowski and the Sox could go a million different ways. What say you Sox fans? Should the Sox look within the organization or go outside with a free agent/trade? Comment below or reach out to me on twitter @Ian_Vescera