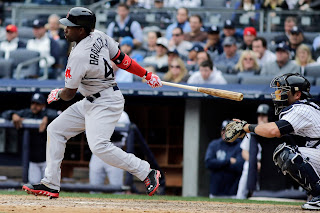 The Red Sox offense has been on quite a roll as of late. With 4 homers last night, one each from Ortiz, Shaw, JBJ and Hanigan, the team has muscled it's way to one of the top run producing teams in the AL over the past couple of months. But as the welcome the AL leading Kansas City Royals, the storyline for this season remains the same; they're still looking for consistency from the entire team on a night in, night out basis. The Royals have won 5 straight but were swept by the Sox earlier this season.

Wade Miley (9-9 4.58) will be on the hill for the Sox tonight as they look to win their third straight, which would be the first time in 3 weeks. Danny Duffy (6-5 4.03) pitched for the Royals tonight, who own a 14 1/2 game lead on the 2nd place Minnesota Twins for the AL Central crown. With a sizable lead like that in the standings, it doesn't appear that the Royals are taking their foot off the gas as they head towards the stretch run. Eric Hosmer has a 10 game hitting streak and over their last 12 games the team has a 10-2 record.