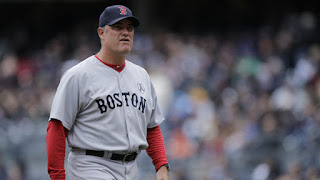 Red Sox manager John Farrell announced a short time ago at a Fenway Park press conference that he has been diagnosed with Stage 1 lymphoma.

The cancer, described by Farrell as "very treatable," was discovered earlier this week during hernia surgery that Farrell underwent while the team was in Detroit.

Bench coach Torey Lovullo will take over as manager for the rest of the season while Farrell undergoes treatment, which is expected to begin next week at Massachusetts General Hospital. Farrell said he will undergo chemotherapy for nine weeks.

David Ortiz and Dustin Pedroia were present during Farrell's press conference in support. Players were said to be visibly shaken when the news was announced in the locker room.