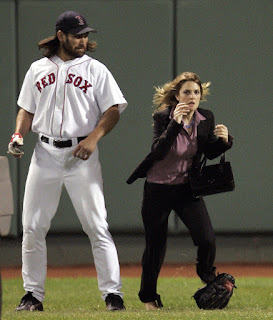 On Thursday night the Red Sox hosted the third annual Movie Night at Fenway Park and showed a movie that hit home for all Red Sox fans, Fever Pitch. The movie was presented by Mitsubishi Electric and was shown on the big screen.

The Red Sox first hosted movie night in 2013 when they showed The Sandlot on the 20th anniversary of the movie. This year the Red Sox allowed fans to show up early to the ballpark and walk around the warning track and sit in the Red Sox dugout. There were approximately 8,000 people that went to watch the movie and enjoyed the their time at Fenway Park.

It appears that this is becoming a tradition at Fenway Park. If you had a pick of either a baseball movie, or a Boston based movie what would you want to watch? Leave your answer below or let me know on twitter by clicking here.