The Red Sox got solid pitching and timely hitting to beat the Mets 3-1 on Saturday afternoon at Citi Field.

Joe Kelly earned his sixth straight win going 7.1 innings. He allowed one run on five hits before giving way to Tommy Layne. Kelly walked two and struck out a pair in improving his record to 8-6.

Jean Machi came on in the ninth to earn the save, his third of the season. 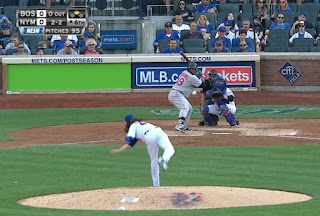 With the game scoreless in the top of the sixth inning, Pablo Sandoval (pictured) doubled home Mookie Betts and came around to score himself on an RBI ground out by Brock Holt.

Betts hit a solo home run in the top of the eighth to make the score 3-1.

The highly-touted Jacob deGrom started for the Mets. He was charged with two Boston runs on four hits. He struck out ten and walked just two. He was lifted with his pitch count at 109.