The Red Sox fell to the Mets 5-4 at Citi Field on Sunday afternoon. They took two of three from New York in their first-ever Citi Field appearance.

Boston had the tying and go-ahead runs on in the ninth but Mookie Betts struck out to end the game. 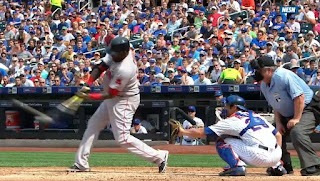 With the Mets leading 1-0 in the top of the sixth inning, David Ortiz (pictured) drove in Mookie Betts with his 28th home run of the year, off starter Noah Syndergaard. It was the second home run of the series for Ortiz and the 494th of his career moving him to within just six of 500.

Wade Miley allowed four runs on nine hits in six innings. He walked one and struck out six in the no-decision.

New York got three back in the bottom of the sixth to take a 3-2 lead on a two-RBI double by Juan Uribe and an run-scoring single by Anthony Recker.

The Red Sox tied the game in the seventh on an RBI double by Jackie Bradley Jr. Mookie Betts followed with a hustle triple on a ball that fell in the triangle between third, left and shortstop.

The triple was the 50th extra base hit of the year for Betts who becamse the first Red Sox player with 50 extra-base hits in a season before the age of 23 since Jim Rice did it back in 1975.

Michael Cuddyer's single off Heath Hembree in the bottom of the seventh drove in the winning run for New York.