Recap - Tazawa blows the save, Sox drop the finale

The Royals came from behind to beat the Red Sox 8-6 on a soggy afternoon from Fenway Park. Eduardo Rodriguez (pictured) started for Boston and went 6 innings allowing 4 runs (2 earned) on 7 hits. 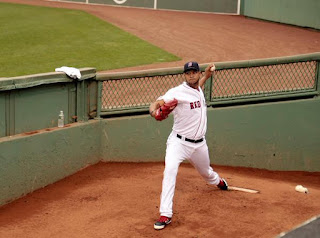 The Sox were in business early as Jackie Bradley Jr. doubled to plate the game's first run in the 2nd inning. It was followed by an RBI single for Josh Rutledge, giving Boston a quick 2-0 lead.

The Royals cut the lead to 2-1 after a sac fly in the 3rd. Josh Rutledge's error in the 4th helped the Royals plate 2 runs and take a 3-2 lead. A Mike Moustakas homer made it 4-2 Royals in the 6th.

Boston then scored 2 runs in both the 6th and 7th innings to give the Sox a 6-4 lead. In the 6th, David Ortiz hit a sac fly and then Rusney Castillo tied the game with an RBI single. Bradley gave the Sox a 5-4 lead in the 7th with his second RBI double of the day. Pablo Sandoval then recorded an infield single and knocked in an insurance run, giving Boston a 6-4 lead. It wouldn't last.

In the 9th, Junichi Tazawa blew another save when Eric Hosmer's 2 run single tied the game with two outs. Two batters later, Moustaskas doubled to drive in 2 runs which put the Royals up 8-6.

Wade Davis was able to shut the Sox down in the bottom of the 9th and the Royals were able to salvage a split in the series.