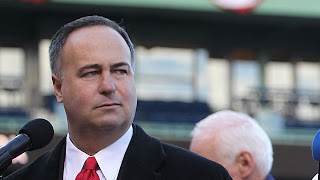 Bill Foley (@Foles74)
Contributing Writer
In one scene in the movie The Town, you can hear Don Orsillo calling a Red Sox game in the background.
It was a subtle, authentic way for the director, Ben Affleck, to let the movie watchers know that they were in Boston. For the past 15 years, nothing said “Boston” more than the kind, warming voice of Orsillo.
We welcomed Orsillo into our homes night after night, season after season. He was always more than a baseball announcer. Don Orsillo was our friend, so we were never alone when watching the Red Sox play.
It must be kind of how Dodgers fans have felt about Vin Scully all these years.
Whether he was getting excited during a walk-off hit, calling a home run “very far and very gone” or trying be Jerry Remy’s dentist when his tooth fell out in the middle of a game, Orsillo made watching the Red Sox worth the three hours of your time.


Now, that welcoming voice is leaving Red Sox Nation. For reasons that nobody can possible understand, the New England Sports Network and the Red Sox don’t want Orsillo back.
The station and the team weren’t even going to tell us about the dismissal of our friend until January. They must have been mad when Dennis and Callahan did it for them Tuesday morning.
After going silent for nearly a week after the news leaked out, Red Sox chairman Tom Werner finally told Boston Herald columnist Steve Buckley that “We felt that starting next year, it was worth going in a different direction re-energizing the broadcast.”
This will go down as the worst personnel move of the 21st Century for a team that owes Hanley Ramirez nearly $70 million over the next three seasons.
Even though the NESN ratings are as low as the Red Sox winning percentage the last two summers, Werner said the dismissal of Orsillo wasn’t about ratings. It’s just that they wanted Dave O’Brien in the booth.
O’Brien is a very good announcer. He’s one of the best. Peter Gammons called him one of the top few baseball play-by-play guys in the nation, and he is right. The same could be said about Orsillo, if you ask Red Sox fans.
Indeed, Red Sox fans are lucky to have a guy like O’Brien. The thing is, we already have him. He’s been calling Red Sox games on the radio with Joe Castiglione since 2007.
In a way, Red Sox fans have been spoiled with our announcers. We really have. We don’t have some clown making over-the-top ridiculous, pre-planned home run calls like the Yankees do in John Sterling.
We don’t have an obnoxious cheerleader like the White Sox do in Ken Harrelson.
We don’t have an announcer who cares so little about the opposing players that he doesn’t bother to learn their names like the Mariners have in Dave Sims.
We have been blessed with Don and Jerry on the TV side and Joe and Dave on the radio. Before O’Brien came aboard, we had the pleasure of listening to the loveable Jerry Trupiano.
The dismissal of Orsillo smells like a move that was purely personal. Chad Finn of the Boston Globe reports that Orsillo “was never a favorite of Joseph Maar, NESN’s vice president of programming and production/executive producer who arrived with the network in July 2012.”
That’s great. We’ve loved listening to Orsillo since 2001, but now we can no longer do that because of a guy who hasn’t liked him since 2012?
Without question, Red Sox coverage will be great in 2016. Even if Remy, who appears to be heartbroken over the dismissal of Orsillo, decides not to come back — and who could blame him if doe not? — O’Brien will do a tremendous job.
Those who don’t know him will respect him and maybe grow to love him as they welcome Dave into their living rooms every night.
Maybe someday a director will have O’Brien’s voice in the background of a movie set in Boston.
The decision to tell our friend Don Orsillo to go away, however, will always be looked on as a cold, sad move by some suits who clearly don’t understand what it means to pour your heart into the Red Sox every night.
The only thing this move will re-energize is hard feelings.