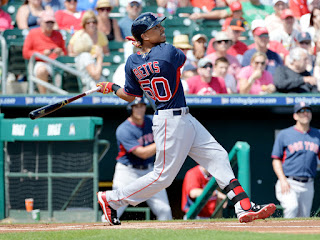 A very big Red Sox storyline that fans have paid attention to since the All Star break finally came to it's grand finale. David Ortiz hit his 499th and 500th homers on Saturday night at the Trop to become the 27th player in league history to hit 500+ home runs. After a much deserved day off yesterday, Ortiz is back in the lineup tonight against the Orioles as his team looks to gain some more ground within the division. He'll be facing off against O's starter Kevin Gausman (2-6 4.43) who hasn't won a game since August 1st and is 0-4 in seven starts since that last victory.

The Red Sox will have rookie star Eduardo Rodriguez (9-5 4.05) on the hill as he attempts to get his 10th win on the year in just 19 starts this season. While the young starter has had a few rough outings this year, much of that is expected as he continues to figure out the best way at using his arsenal of pitches. Rodriguez is 3-0 in his last 4 starts with an ERA of 1.73 and will benefit from a six-man rotation for the remainder of the season, something that interim-Manager Torey Lovullo wants to do to help out the young starters workload. The young starter will have to deal with Chris Davis, who recently hit his league leading 42nd home run.

- Mookie Betts extended his hitting streak to 18 games yesterday and is now looking to tie Jacoby Ellsbury at 19, Ellsbury was the last Sox hitter to have a streak this long, doing so in 2013
- Rodriguez has given up 17 runs in his last 13 2/3 innings pitched on the road, resulting in 3 straight losses
- Ortiz is 4/8 against Gausman, with 2 homers