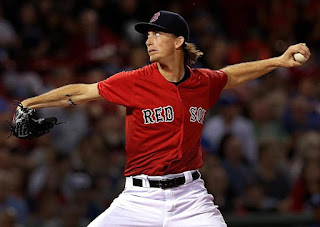 The Red Sox will attempt to avoid being swept by the O's tonight, as they continue to battle out of the AL East basement. Henry Owens (2-2 5.25) will be on the mound tonight for the Red Sox, making his 8th start of the season for the 22 year-old. Owens is averaging about 8 strikeouts per 9 innings, which is a pretty impressive number for any rookie, but he's had some issues lasting deep in his starts, averaging about 5 innings per start. It was announced earlier this week that fellow rookie Eduardo Rodriguez is going to make 2 more starts this season, in order to limit his workload. It remains to be seen if the team will do the same with Owens.

The Orioles will have their own rookie Mike Wright (2-4 5.45) making the start tonight too. In his last 2 starts, he's lasted just 4 and 5 innings respectively, while giving up a total of 7 runs. The O's are just 5 1/2 games behind the Astros for the 2nd Wild Card spot and are looking to get the final burst of momentum with a sweep in this series. The two teams have one more series against each other later on this month, and Baltimore has won 11 of 15 games between the two.

- Chris Davis is hitting .413 this month with 15 RBIs in 13 games
- Junichi Tazawa is being shut down for the remainder of the season, he's struggled as of late and is 2-7 with a 4.14 ERA in 61 relief appearances
- Mookie Betts and Xander Bogaerts are both out of the starting lineup today, giving the two young hitters 2 straight days off