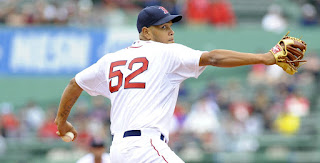 The final home stand of the season begins tonight for the Red Sox, and they've trying to finish the final two weeks of the season on the upswing they've been on for the last month. David Ortiz will be sure to be recognized by the Fenway faithful with a loud ovation, since this is his first home game since hitting his 500th homer last week against this same Rays squad. His team still has an outside chance at finishing .500 on the season, just needing 10 more wins this season will get them there and if they can win this 4 game series against the Rays, they'll be able to leapfrog into 4th place by the end of the week.

Eduardo Rodriguez (9-6 3.96) gets one of his last starts of the season tonight. It's believed that the team will limit him to one more start after tonight in order to not overload his first big league season as a starter. The Rays will counter with Chris Archer (12-12 2.95) who has never had any success against the Sox. In 10 career appearances, Archer is 1-6 with a 5.47 ERA against Boston, with two of those losses coming this season, although he's handled one of their best hitters, Dustin Pedroia, who is 3/18 in his career.