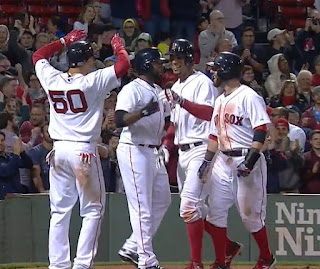 Xander Bogaerts' first career home run in the bottom of the eighth inning helped the Red Sox survive a shaky first inning by Eduardo Rodriguez as they came from behind twice to beat the Rays 8-7 at Fenway Park on Monday night.

The win moved Boston into fourth place, a half-game ahead of Tampa Bay.

The Rays put three up in the top of the first inning on a lead-off home run by Brandon Guyer, an RBI double by Evan Longoria, and a run-scoring single by Logan Forsythe.

Rodriguez settled down after that shutting the Rays out for the next five innings. He scattered six hits, walked two and struck out four.

Boston took a 4-3 lead with three runs in the bottom of the seventh inning only to have the bullpen promptly hand it back in the top of the eighth.

Trailing 6-4 in the bottom of the inning, Jackie Bradley Jr. was hit by a pitch with two out. Mookie Betts and Dustin Pedroia followed with singles to load the bases and Bogaerts followed with his seventh home run of the year.