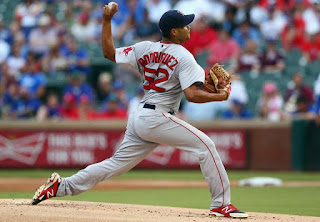 The Red Sox wrap up their 2015 season on the road for a two city trip beginning tonight in New York against the Yankees for a four game series. This follows a very impressive conclusion to their final home stand against the O's, in which they completed 3 straight shut out wins and improved their record to 75-80. They will have rookie Eduardo Rodriguez (9-6 3.97) on the mound, making his last start of his impressive first season in the big league. He's faced the Yankees three times already this season, going 2-1 with a 2.45 ERA.

The Yankees face an up-hill battle trying to snatch the AL East title away from the Blue Jays in the final week of the season. They appear to be settled into the top Wild Card position right now and are looking at locking up a postseason berth with a few wins in this series. They'll have Ivan Nova (6-9 4.87) making the start and he's coming off a pretty good start against the Jays where he gave up 1 run in 5 2/3 innings. He had been removed from the rotation earlier in the month and has only 1 win at home in his last 5 starts with an ERA of 9.41.

- David Ortiz is hitting .400 against Nova in his career; in 29 plate appearances he has 3 doubles 2 homers and 5 RBIs
- Jacoby Ellsbury has two solo homers against Rodriguez this season
- Xander Bogaerts needs just 10 more hits this season to reach 200 for the year