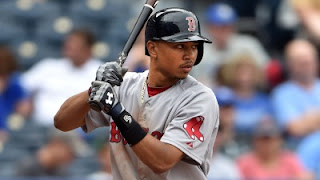 The Red Sox are looking to sweep the New York Yankees in a 4 game series for the first time at Yankee stadium since 1912, that's when New York went by the name of the Highlanders. Yes, it's not a frequent occurrence for the Red Sox to have this much success against their biggest rival, but what's more impressive is that the kids that haven't played in a lot of important games are thriving well against a soon to be playoff team. These first 3 wins in the series have pushed the celebration further back for the Yanks as they currently sit on their magic number of 1 to clinch a Wild Card spot for next week.

Tonight, the Yankees will have CC Sabathia (5-10 4.82) trying to help the team clinch the elusive playoff spot that was for the taking on a number of occasions last night. Sabathia has led a playoff team before, but this year he might be 3rd in the rotation if they can advance past the Wild Card round. The Sox will counter with Rich Hill (2-0 1.17) who has rediscovered himself since joining the club and had pitched extremely well during the 3 starts he's made. Hill has struck out at least 10 batters in all 3 starts and is facing the team that let him go last August when he was a reliever.

- Mookie Betts is the only AL player ever to record at least 42 doubles, 18 homers, and 20 stolen bases in by the age of 22
- Jackie Bradley Jr moves up to the two-hole, which is the highest he's been moved up in the lineup all year
- Xander Bogaerts now just needs 6 hits to get to 200 on the season