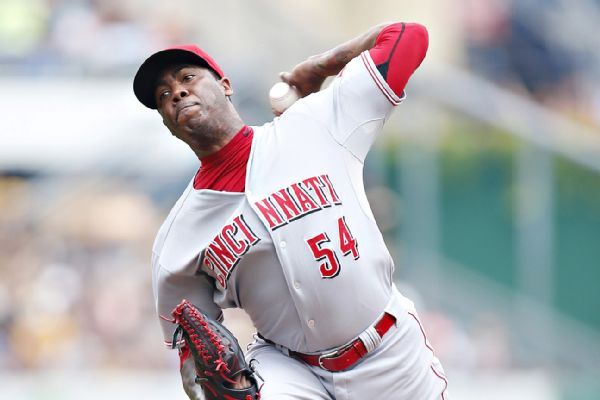 Three relievers had 100 or more strikeouts in 2015. The New York Yankees have all three in Dellin Betances, Andrew Miller, and now, Aroldis Chapman, the rocket-powered southpaw acquired from the Cincinnati Reds for four prospects on Monday.

The 27-year-old Chapman converted 33 of 36 save opportunities with a 1.63 ERA in 65 appearances last year and definitively completes Major League Baseball's most formidable bullpen.

But while he waits to officially don pinstripes, the four-time NL All-Star awaits the verdict of an MLB investigation into a recent domestic abuse allegation. He brings to the Bronx the possibility of suspension after an incident in October. Chapman admitted to firing eight gunshots in his garage after a disagreement with his ex-girlfriend who claims he choked her. Chapman was not charged or arrested for a crime.

The incident caused a deal sending Chapman to the Los Angeles Dodgers earlier this month to fall apart and steered the Boston Red Sox, a recent contender for best bullpen in the MLB, to closer Craig Kimbrel in November.

"Certainly there are some serious issues here that are in play," Yankees general manager Brian Cashman told MLB.com's Brian Hoch. "There's risk, and I understand that. We've done as much due diligence on the subject at hand as we possibly can, and we've completed the transaction based on a lot of that due diligence."

That due diligence will be placed under a microscope until the decision is made. If Chapman is suspended, the Yankees will face the justified public outcry for supporting and paying an abuser, an outcry dissappointingly quiet at the moment. A suspension could affect Chapman's free agent status as well and make him eligible for his final year of arbitration in 2017 instead of 2016. It will also really put A-Rod in a new light for you

If Chapman is not suspended, the Yankees might listen closer to inquiries about their other closer with 30+ saves and 100 strikeouts, Miller. Cashman said Tuesday morning the team planned to retain the left-hander and transition him to a set-up role. With a rotation that doesn't exactly light the world on fire, the Yankees have every reason to keep a bullpen that will.

With three years and $27M left on his contract, Miller would command a large return— a deal close to the one San Diego received for Kimbrel. The Padres landed Manuel Margot who ranked third among Red Sox prospects by MLB.com, and Javier Guerra who rated sixth. The Yankees may want to recoup some of the young talent they lost in their own sixth-ranked prospect, infielder Eric Jagielo, and tenth best prospect, right-hander Rookie Davis, who fittingly has yet to make his debut. But that's just me ranting optimistically because I don't want the Yankees crushing my dreams with a hat trick of the best relievers in baseball.

Let the Battle of the Bullpens begin!