Another strong outing by Rick Porcello and a reappearance by the Red Sox offense added up to a 7-3 victory over the Tampa Bay Rays at Fenway Park. 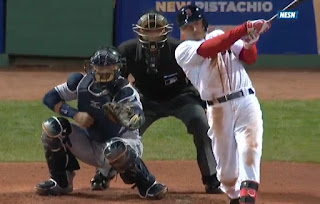 One night after being held to just one hit, the Red Sox scored five times in the first two innings. Xander Bogaerts singled home a run and David Ortiz drove in two more with a double in a three-run first inning. Mookie Betts (pictured) drove in Jackie Bradley Jr. with his third home run of the year in the second.

Porcello went seven innings, allowing three runs on six hits. He struck out nine and walked just one in recording his team-leading third win of the season.

Rays starter Chris Archer lasted just 4.1 innings in losing his fourth game of the year. He was charged with six runs on eight hits and three walks while striking out six.

Betts, Bogaerts, Ortiz and Travis Shaw each had two hits for the Red Sox.