The Indians jumped out to a 4-0 lead in the bottom of the first inning off Red Sox starter Clay Buchholz, three of them on Carlos Santana's first home run of the season. Buch lasted just four innings, charged with five runs on six hits and three walks as Cleveland beat the Red Sox 7-6 at Progressive Field on Wednesday night. 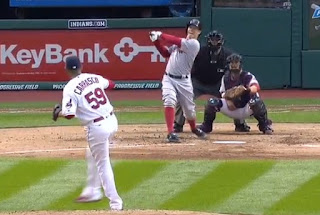 The Indians tied the game with a run in the bottom of the sixth and took a 7-6 lead in the seventh on a solo blast to left by Mike Napoli.