What to do with Pablo? 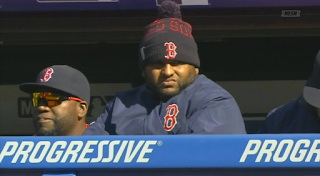 Pablo Sandoval lost his starting job at third base this Spring Training when he showed up to camp way overweight and then underperformed both offensively and defensively? But what is next for the third baseman who is owed $17.6 million this year?

Fortunately, Red Sox beat writer, Brian MacPherson of the Providence Journal hosted an AMA (Ask Me Anything) on the Red Sox subreddit today and I was able to ask him about Sandoval. I asked, "What benefit does Farrell see with him on the bench? He won't enter the game as a defensive replacement, or a pinch runner. He has been historically bad as a pinch hitter. Is him on the bench an addition by subtraction?" His answer was "He's on the bench because he's on the roster, and he's on the roster because keeping him as insurance behind Shaw makes more sense than cutting him loose. We really still don't know what to expect from Shaw at the plate or at third base over a full season."

That totally makes sense, but I don't think Brain fully answered my question. How will Sandoval impact this team? He can't do much when on the bench. But as I write this, my questions have been answered. Sandoval pinch hits with two outs and Hanley Ramirez on first base. Ramirez steals second, and takes third on a wild pitch before Sandoval flied out to center to end the inning.

Sandoval lost the job because his defense was not up to par, but in a tie game he is currently a defensive substitution? I don't really understand that, and I have to chalk it up to a strange decision by the manager. Defensively, for the 2 innings that Sandoval was in the field he had no impact on the game, either positive or negative.

It seems like the Red Sox are committed to Shaw at third base until he has a rough patch, but having Sandoval on the bench does this team no good. He isn't a utility player as he can only play one position and he has been bad historically to pinch hit. I guess only time will tell what the Red Sox do with Pablo Sandoval.