Recap - Ortiz Drives In 3 To Back Strong Buchholz Performance

A strong outing by Clay Buchholz and a three-RBI night by David Ortiz resulted in a 5-2 Boston win over the White Sox in Chicago on Wednesday night.

Pitching for his spot in the rotation, Buchholz pitched seven very strong innings allowing just two runs on three hits and two walks while striking out six. He retired sixteen of the last seventeen White Sox hitters he faced including the last ten in a row.

The win, combined with a loss by the Orioles, moved the Red Sox back into first place in the American League East. 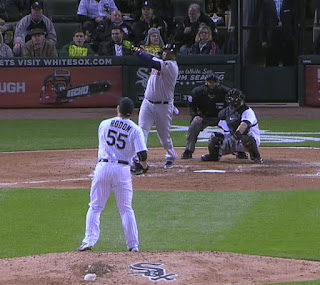 Chicago scored first on a two-run homer by Jose Abreu in the bottom of the first inning. After that, Buchholz only allowed one more hit through the seventh inning.

The Red Sox cut the lead in half in the fifth on an RBI single by Xander Bogaerts that drove in Christian Vazquez. Ortiz (pictured) put Boston ahead with a two-run blast in the fifth, his sixth home run of the year. It was also the 509th long ball of his career tying him with Gary Sheffield for 25th on the all-time list. He extended the lead to 4-2 with a run-scoring single in the seventh.

Jeff Rutledge added an RBI single in the top of the eighth to drive in Chris Young.

Koji Uehara pitched a clean eighth inning; Craig Kimbrel got a game-ending double play to preserve the win in the ninth.

Bogaerts had a three-hit game for Boston.