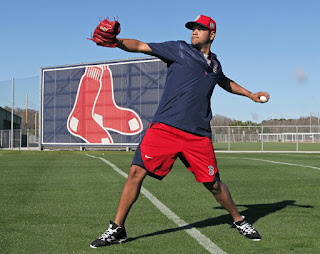 With 2016 winding down we all hoped that news like the passing of Carrie Fisher, best known for Princess Leia role in Star Wars, would be relegated to the past.

It has been a tough year.

For the Red Sox you might think that the offseason would mean that the bad news would be limited to watching David Ortiz enjoying his retirement as we all ponder the future without the enigmatic designated hitter.

It ain't over Red Sox Nation, with just a few days left in 2016 the news of Eduardo Rodriguez came trickling in via the Boston Globe's Nick Cafardo.

It appears that Rodriguez, who has been pitching winter ball in Caracas, Venezuela, had to leave his game last Tuesday when he suffered right knee discomfort. Further inquiries resulted in the following comments by head of baseball operations Dave Dombrowski, “He tweaked his knee last night pitching. It doesn’t appear to be anything serious.”

This was the same knee that Rodriguez injured at the start of 2016 causing him to miss the first two months of the season.

With the depth in the starting rotation a real question for the Red Sox, the last thing they need are injuries like this to continue raise their head. It is a long way off to Spring Training, but with offensive questions being raised it is of some importance that the starting rotation remain both healthy and dominant.

Keep a close eye on Rodriguez, along with the rest of the starting rotation, as they are going to be the key to a successful season in 2017.