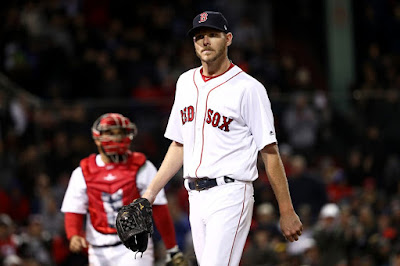 After having some technical difficulties on our previous attempt for the third edition of the RSL Podcast, we were successful late last night and discussed all things Red Sox. Ben Whitehead had to put up with me twice in a week, but thankfully he brought his A game each time.

We started off with a discussion about his most recent post regarding the three-headed monster that could emerge in the Red Sox rotation. While the team hasn't fully gotten healthy over the first two months of the season, the rotation appears to be ready to break out. The potential upside from Porcello-Price-Sale in the last three games of the series in Baltimore might allow the offense to take a little bit more time to develop a rhythm as we head to the summer months.

The biggest cog in the rotation at the moment has been Chris Sale, who improved to 7-2 yesterday. Ben made an extremely bold statement about the Lefty and his future with the team.

Finally, we previewed the crucial two week stretch that the team begins tomorrow night in New York against the first place Yankees and ends against the hottest team in baseball, the Houston Astros. We both agree that this could be the most opportune time to put some space between themselves and the other Wild Card hopefuls.