If you're going to lose, you may as well do it in style.

The Red Sox eight-game winning streak came to an end in Oakland Saturday night as they fell to the Athletics 3-0 at the Coliseum. 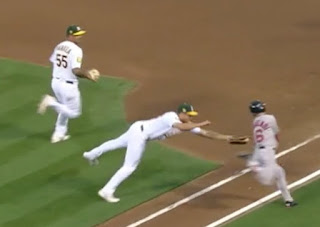 They didn't just lose...they were no-hit for the first time in 25 years. Sean Manaea walked Mookie Betts to lead off the game and then didn't walk another batter until Andrew Benintendi with two out in the ninth.

Manaea struck out ten in the Oakland win. The only other Red Sox base runner came on a Marcus Semien error in the top of the fifth inning.

The Red Sox actually had a hit on the board briefly in the top of the sixth but it was ruled that Benintendi had run out of the base line (pictured) and the call was reversed.

Chris Sale started for Boston and went seven innings in the loss. He allowed all three Oakland runs on six hits. He walked one and struck out ten.

The Red Sox go for the series win Sunday afternoon with David Price on the mound.