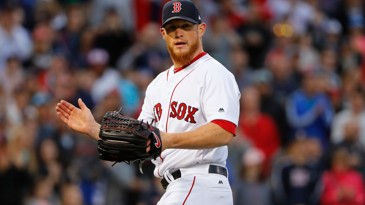 While the Red Sox would like to keep their 31 year old closer Craig Kimbrel on a short term contract, it's looking more and more likely that he will receive more lucrative offers from some National League teams.

There’s speculation Kimbrel might return to the up-and-coming Atlanta Braves, where he started his career. The Cardinals, Nationals, and Phillies also are reportedly interested.


Apparently despite the fact that Kimbrel has given Red Sox fans multiple heart scares, he's the best closer "of all time."


Agent Dave Meter has a fairly straightforward pitch on client Craig Kimbrel. Points out Meter: He’s the best alltime, not just recently but alltime. Lowest ERA, lowest batting average against, lowest OPS against. Also points out he saved all his chances even this postseason.
— Jon Heyman (@JonHeyman) November 6, 2018

If Kimbrel was to leave for greener pastures the Red Sox would shift to either Matt Barnes or Ryan Brasier as their closer for the upcoming season. They could also check out the free agent market for a less pricey alternative to Kimbrel. Regardless of who the Sox give the closer role to to begin the season, they'd obviously have the opportunity to snag another team's closer at the Summer's trade deadline when non-contenders become sellers.

Also as we've seen in recent years, the dominant one inning closer position has lost some of it's luster in the post season as managers shift to an all hands on deck approach and use starting pitchers in late inning situations. Red Sox manager Alex Cora went to Nathan Eovaldi, David Price and Chris Sale consistently in the playoffs in key relief situations. And it was Sale who Cora elected to close Game 5 of the World Series and not Kimbrel. If you're into betting on baseball, picking the closer to finish off a win is no longer such a sure bet.

Kimbrel debuted with the Atlanta Braves in 2011 where he won the Rookie of the Year award. The Red Sox acquired Kimbrel from the San Diego Padres three years ago for prospects Manuel Margot, Javier Guerra, Logan Allen, and Carlos Asuaje. He is a seven time all-star who this past season notched his 300th save making him the youngest player in history to reach that milestone.

Of course with baseball contracts the wiser GM's base their offers on what are you likely to produce in the future, instead of focusing on past performance (the latter is for agents to fawn over). The Red Sox could be much better served allocating some of the Kimbrel cash for Eovaldi. We'll keep you updated on any further details.