The feeling in the bleachers was that just a few adjustments and the Red Sox might be turning the corner.

There are a few key pieces on the verge of a return to the Red Sox lineup after injury list stints.

These pieces might just start making the difference in the team, the offence, and the rotation.

The list of injuries grew significantly early this season, but most of the news is pointing to the return of almost all of these players sooner rather than later as reported by Ian Browne.

First off, Dustin Pedroia is slated for a rehab start on Thursday for Double-A Portland. Both Pedroia and manager Alex Cora were positive on the quick return when asked how the knee was progressing.

“A lot better [now],” said Cora. “The way that night [was], it felt like that was it right there. When you talk pop and knee, you don’t feel comfortable with it. I think he feels good. He’s moving well. We’ve been through this the last year. Hopefully we keep getting information, I know there’s new spikes, new brace, there’s a lot of effort into this, so now it’s just go out there and see how it goes.” 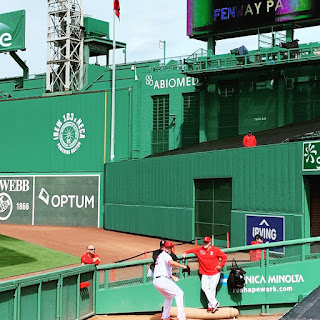 The rehab for Pedroia's knee is unmapped territory so the it's more about rhythm at the plate right now.

“We’ll see how it goes,” said Cora. “He hasn’t played in a while. He needs at-bats. He needs to play. They’ll go over the program and see where we’re at.”

Up to now the Red Sox have been very cautious with Pedroia's rehab planning, delaying his starts at the Major League level well past opening day. It's seems odd that they now are speeding up the process this time with a short rehab and then planning to bring him right back to the active roster.

"One thing I don’t know if you guys are aware of, but it’s a little bit different back in the day than when I played,” Cora said. “The player has input on this. I know sometimes it feels like we’re cutting them short or whatever, but it’s just the way it goes nowadays. We do our best to let him know how we feel about it, what we like to do. It’s not that they go over the program or the team but if they feel they’re fine, that’s within the rules. That’s how it works.”

Maybe not a good idea to listen to Pedroia's input, as last time anyone checked he didn't have a medical degree?

Eduardo Nunez has been out since April 18 with a mid-back strain starts his rehab with Triple-a Pawtucket on Monday.

Brock Holt started his rehab last Friday, going 1-3 as he returns from a scratched cornea. The plan was to play on Saturday but that got bumped to Sunday due to rain out. He ended up being a late scratch from the lineup due to right shoulder soreness, possibly setting him back on a return to the roster.

Brian Johnson, sidelined on April 6 with elbow inflammation, threw a full bullpen session which we attended first hand. He had good command of his full range of pitches and was watched closely by Matt Barnes, Rick Porcello, and Brandon Workman along with the pitching coaches.

Post-session he was signing for kids in the bullpen and admitted he felt good.

He'll throw a second session on Wednesday before a final decision is made on his return to the rotation.

J.D Martinez was out for the second straight game on Sunday since back spasms flared up. Cora mentioned pregame on Sunday that he could be available to pinch hit, but wanted to avoid using him if possible.

“J.D is better, but not better, you know?” Cora said before the game on Sunday. “Still tight. I think we’ll try to stay away from him today. If needed, we’ll use him later on depending on how he progresses during the day. Not starting him is the smarter thing to do.”

Martinez is expected to return to the offence in Monday's opener against the Athletics.