The Red Sox put together a 14-hit offensive performance Saturday night to beat the Tigers 9-6 at Comerica Park in the first game of a three-game weekend series. 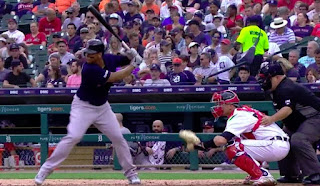 Rafael Devers (pictured) continued his torrid streak with another home run, his fourth in as many games, extending his hitting streak to nine straight games.

Boston had a 3-1 lead when the game was stopped after five innings for a rain delay and when the game resumed a little over two hours later, they picked up right where they left off, tacking three more runs on.

The less said about Marcus Walden's performance in the bottom of the four-run Tigers sixth inning, the better. Fielding errors by Mookie Betts and JBJ didn't help much, either.

Every Red Sox batter had at least one hit with Betts leading the way with three. Michael Chavis, Christian Vazquez and Jackie Bradley Jr. each had two. Xander Bogaerts launched his 17th home run of the year in the eighth, driving in three of his four runs in the process.

Eduardo Rodriguez improved to 9-4 with five strong innings allowing just one run on four hits. He struck out four and walked just one.