Two days off apparently worked wonders for Andrew Benintendi. The five days between starts for Rick Porcello weren't enough to figure out what's wrong with him. 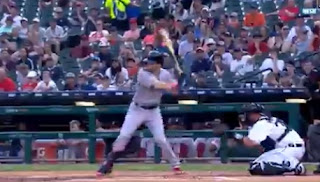 Benintendi (pictured) went 4-for-6, falling a home run short of the cycle, in a 10-6 Red Sox win over the Tigers in Detroit Saturday night. Celebrating his 25th birthday, the Boston left fielder didn't appear to be the least bit fazed by a four-hour rain delay, coming out with a first-inning triple.

Porcello, on the other hand, hit another speed bump in the bottom of the sixth inning charged with four runs as Detroit closed the gap to 7-6. He eventually was credited with the win, but it's the third straight start in which he has given up five or more runs.

Mookie Betts and Marco Hernandez each had three hits; Brock Holt and Christian Vazquez contributed a pair apiece in a 17-hit Boston attack.

The Red Sox finish out the road trip with David Price on the mound Sunday afternoon.