"We ask our fans to reserve judgement...."

That was the phrase repeated over and over by John Henry, Tom Werner, Sam Kennedy, and Chaim Bloom at their Wednesday Fenway Park press conference in the wake of the firing (mutual decision...yeah...right) of manager Alex Cora a day earlier. 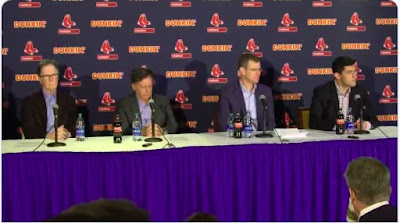 It was an uncomfortable 45 minutes or so as the front office quartet was asked questions from an assembled media group about the 2017 Apple Watch incident, Major League Baseball's investigation into cheating allegations by the Houston Astros, where the team will look for Cora's successor, and more. Saying they will "miss everything" about Cora, all were careful to not ignore MLB's recent edict to its 30 clubs to not discuss its findings in the Astros investigation that ultimately led to the firings of GM Jeff Lunhow and field manager AJ Hinch.

Thus, the repeated request to "reserve judgement" until the club learns what Major League Baseball plans to do to them (hint - expect something stronger than what was handed down to the Astros).

The whole thing made you wonder why, with MLB's investigation of the Red Sox still ongoing, Red Sox ownership even bothered to address the media.

Henry, who clearly is not comfortable speaking in public, deferred a number of questions to the others. Werner and Kennedy were careful to not say anything too inflammatory with regard to MLB or Cora.

The recently-hired Bloom, when he got a chance to speak, offered his thoughts on finding a new manager (he did not rule out a hire from within), who might be kept from the current coaching staff, and how quickly the team will need to move to get ready for spring training.