Sign-Stealing Saga: Everything You Need to Know 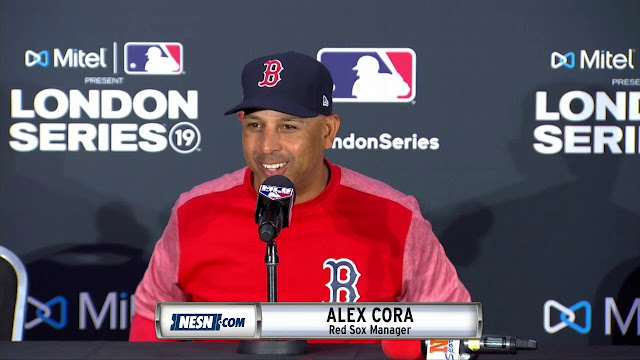 Today in articles that didn’t age well: yeah, Alex Cora did not stay in Boston forever. If you haven’t heard, amidst investigations of the 2017 Houston Astros and other related sign-stealing scandals, Alex Cora and the Red Sox mutually agreed to part ways. Or if you prefer the version without the sexytalk, Cora was fired. You may be upset, you may be grateful, you might not even care—as Bryan discussed earlier this week, it’s fine no matter what category you fall under. But if there’s one thing you can do no matter what, it’s educate yourself on the matter. If you’re confused about who did what, where and when, we’ve got the important bits for you.

First, the actual events that are being brought to scrutiny. Former Astro Mike Fiers told The Athletic that the Astros used a video camera in center field to steal opposing teams' signs. Investigations by Major League Baseball in January of 2020 have now confirmed that the Astros illegally used a camera system to steal signs during the 2017 regular season and postseason, during which they won the World Series, as well as in part of the 2018 season. The subject of the reports that have kickstarted the latest surge of baseball drama were by none other than Evan Drellich and Ken Rosenthal of The Athletic.


After the results of the investigations showed that the masterminds of the setup included then-player Carlos Beltran and then-bench-coach Alex Cora and the execution of the scheme was player-driven, MLB said enough was enough and handed out punishments to manager A.J. Hinch, executive Jeff Luhnow, and the Astros organization. Not the players, of course, because reasons (formally known as the MLBPA). Immediately after the Astros punishments were laid down, the Astros fired Hinch and Luhnow. That very day, the Red Sox didn’t wait for the full extent of the Cora results; instead, the Sox let him walk, as they should have with integrity on the line.

And THAT’S IT. What is also mentioned in the article by Drellich and Rosenthal are the several other unrelated incidents of rule-breaking by several other teams, including but not limited to the 2018 Boston Red Sox. The confusion? The media is seeking to mislead us. The 2017 Houston Astros committed the ultimate scheme of deception by blatantly cheating the game with installed cameras and, reportedly, wearable devices that have never been within the realm of the game. Furthermore, the investigations are sound and display clear-cut evidence that the Astros used their illegal system through the postseason on their way to at least the 2017 championship run.


You'll be seeing this a lot.

Jose Altuve signaling to his teammates NOT to rip off his jersey in celebration because it would "allegedly" reveal a buzzer that would go off when triggered by someone on the Astros video team.

The foul by the Red Sox, on the other hand, is the equivalent of a speeding ticket for the MLB police—they used the video replay room in a way that was in fact not even illegal in 2016. Since it broke a recently-instated rule by the commissioner, the Red Sox should and will get smacked for the disobedience. That’s not my point. What I want to make clear is this is a completely separate issue from the Astros story. The Red Sox fired Alex Cora because they did not want his now-tainted history (of which they had no information of when hiring him) to distract the team from success. The move that nothing to do with Alex Cora’s time on the Red Sox.

The media, on the other hand, wants to tie the tainted 2017 Astros with the 2018 Red Sox. Why? Because that’s the sexy thing to do for clicks. The 2018 Red Sox are being reprimanded for the same thing that several teams have tried in an attempt to steal signs—use video replay in innovative fashions. The difference between the 2018 Red Sox and the other teams that do exactly the same thing? The media wants to put an asterisk on the 2018 Sox and the other teams have nothing to put an asterisk on. They thought they were going to be really cute with their little headliner, mentioning in passing that several other teams have done the same thing. These include but are not limited to the Yankees, where Beltran spent a significant portion of his career.

But who gets put in the headline in the same light as the 2017 Astros? The one other team that actually won something, of course. The professional media outlets don’t care about accurately presenting the complete truth. They care about attractively presenting a significant amount of the truth. So, shut your trap, CC and everybody else who wants to take our moment from us.


Don’t give me chitter-chatter about how the 2017 Astros and 2018 Red Sox are somehow comparable teams just because of Alex Cora. Don’t give me the two organizations in the same sentence. Don’t give me asterisk talk for the 2018 Sox. The Astros organization is a disgrace—with the way they dealt with everything, not just the sign-stealing business. Just ask Rob Manfred, who references "bad behavior," a concept the Astros are all too familiar with these days.

"The Astros’ violation of rules in 2017 and 2018 is attributable, in my view, to a failure by the leaders of the baseball operations department and the Field Manager to adequately manage the employees under their supervision, to establish a culture in which adherence to the rules is ingrained in the fabric of the organization, and to stop bad behavior as soon as it occurred." — Manfred, 2020


While investigations are still in process, no evidence has even been found yet of the Red Sox’s illegal usage of the video room. Alex Cora’s punishments are yet to be announced, but it’s no longer Boston’s problem. We’re on to Cincinnati. Well, not exactly, unless that’s the name of the next manager.

I said it before and I’ll say it again. Alex Cora was an outstanding manager for the Boston Red Sox, whether or not the spur of the moment will try to make you believe otherwise. He managed the most dominant Red Sox season of all time. He developed players and turned talent into superstar material. The players still love him and you should too, despite his poor decisions in Houston. While the exactitudes of Cora’s losses are yet to be declared, he will likely not manage in Major League Baseball in the near future. But I am of the strong belief that his baseball career is far from over and he could find work in the league going forward.

Right now, Boston needs a manager. Who will it be? Will it come from an internal source? A certain alum who already works with the catchers and used to own a C-patch? Who do you think is most suited for the job, given the welcoming of Chief Chaim? It's going to be a fascinating Winter Weekend at Springfield, that's for sure.

Finally, MLB. Listen up. Do you really think we’re going to let you get away with writers just saying that the 2018 Red Sox “may have cheated”... and oh, by the way, several other teams are likely doing the same as well but the Red Sox need to be scrutinized? Are we just going to ignore that the primary mastermind of the crime scene was on the 2019 Yankees staff? Take a listen yourself to the thoughts of the guy who witnessed it all (and took part in it):

Devices?! Alex, nobody asked about that. You just said it. Not us, you did. Tell me more. This should not be over. We’re not carrying any asterisks. Be proud of the 2018 run. You may never see a season that dominant again. Don’t take away from it. Be grateful that you lived to see that.

#Dodgers Ross Stripling breaks down the difference between what is acceptable and not in sign stealing. #PlayersWeek pic.twitter.com/HZPX5DlwpL