Report: Mookie Betts "inevitable" trade to the Dodgers or Padres is "going to happen" 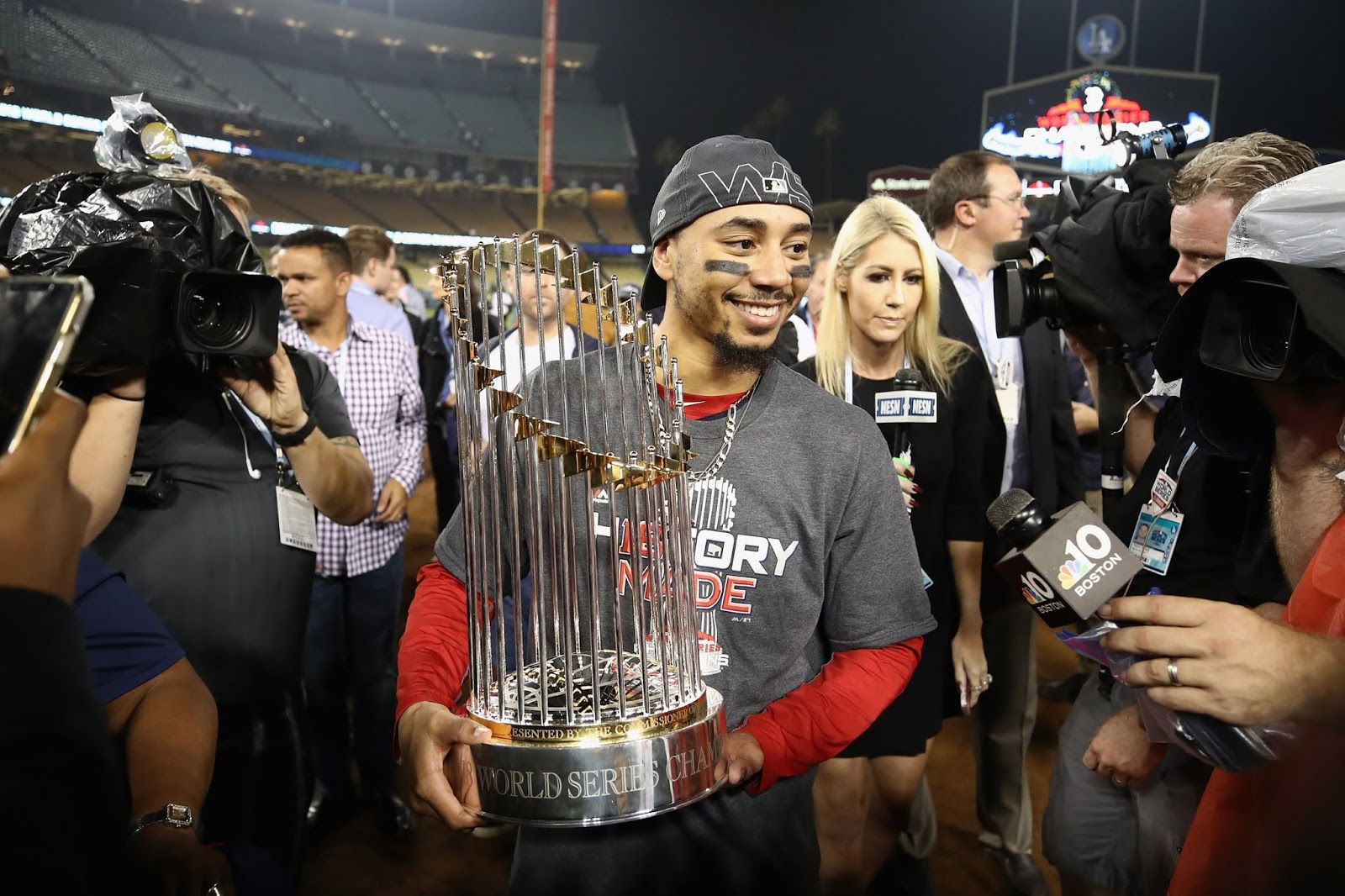 I feel like the Red Sox are the only major market team in baseball that would decide to trade their home grown, 27 year old MVP talent instead of just re-signing him and gladly making him a Red Sox for life. But that's what the Red Sox do. From Babe Ruth through Carlton Fisk I heard the stories as a kid of the Sox either trading or letting their stars sign as free agents elsewhere. And from Wade Boggs and Roger Clemens through Nomar Garciaparra and Johnny Damon the modus operandi continued.

Sometimes the decision would come down to age. You didn't want to pay a player on the wrong side of thirty who had already started to decline. Mookie Betts represents a whole other level of the Red Sox letting one of their stars go. Only 27, was an MVP just a year ago, never has caused any issues, and thrives in Boston. The Red Sox have spun the "We need to trade Mookie because Dombrowski overpaid too many players and the payroll is bloated" excuse. The alternate excuse is "We need to trade Mookie because Dombrowski traded too many prospects and we need to replenish the farm system." Both suck as excuses.

The reality is the Red Sox owners are billionaires. They hired Dombrowski. They could pay Mookie easily enough and not have to sell a mansion or yacht of theirs. The problem is they just don't want to pay the price tag. They could also reduce their tax issued by trading one of our bloated contracts and paying a good deal of their contract. Lots ot teams would be interested in trading for a heavily subsidized David Price. But again, that would mean the Red Sox owners would be opening their checkbooks too wide.

So instead it appears a Mookie deal is pretty imminent. The Red Sox will say it's a good deal, because they needed to restock the farm system. They may even say they needed the prospects to make up for the picks they'll lose in the sign stealing scandal (Because Sox fans deserve to lose Mookie because the manager cheated right?). They'll have tons of excuses. They'll say Mookie's demands were too astronomical. News flash: All MLB players are overpaid and all superstars sign for astronomical amounts... that then get dwarfed in a few years by the next group of superstar signees. That's the profession that the Sox owners are in. It's also the one that's increased their riches.

The Sox owners saving on Mookie Betts isn't like balancing some national spending budget. It's not going to provide free health care to everyone or take care of all vets. It's a money decision so our billionaire owners can buy a nicer new plane or beach house next Christmas.

Since Mookie getting traded is pretty much a foregone conclusion now, here's the latest:

"This is going to happen," Rosenthal said. "Mookie Betts is getting traded. The only question is when and where."

Alex Speier of the Boston Globe reported something similar on Sunday, writing that the Red Sox could make a decision on their superstar right fielder "within the next few days." Per Speier, Boston has continued to discuss potential trades with both the Dodgers and the Padres, and the talks have reached "a relatively advanced stage," though the Sox haven't asked either team for its last and best offer.

According to Rosenthal, there seems to be a good amount of momentum building for the Dodgers, because of Los Angeles' ability to make a "cleaner" trade that only involves Betts being moved for young talent. The Padres' discussions with the Red Sox have included Wil Myers, who is owed $61 million over the next three seasons, and the two sides reportedly haven't been able to agree on how much of that money Boston would assume in a trade.

"This is going to happen, Mookie Betts is getting traded. The only question is when and where." - @Ken_Rosenthal #MLBNHotStove pic.twitter.com/417CDtLOa3
— MLB Network (@MLBNetwork) February 3, 2020

Related: No manager, but at least we have Truck Day
Arbitration Update - Mookie Sets Record